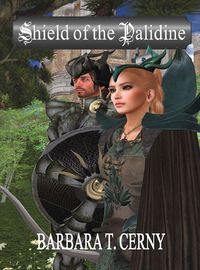 Accidently discovering a portal between Earth and Amorgos, Pierre and Elise find themselves surrounded by frightful creatures that are quite beyond their imagination. Princess Elise d'Orleans, niece to King Louis XIII, is a spoiled brat used to having everyone cater to her every need. She hates Amorgos, hates the races living there, and hates the fact that everyone believes she is their Redeemer. She is supposedly the One to free them from enslavement of their common enemy, the Asmodai. But most of all, Elise hates the fact that the only other human in Amorgos is a stinky peasant who doesn't kowtow to her every whim. Pierre Tonnelier, the village journeyman cooper, finds an extraordinary necklace in the woods outside Chateau de Saint-Germain en Laye, a castle in the French countryside outside Paris. He is forced to sell this unusual piece to pay off his father's debts. What he didn't contend with was the necklace taking him on a strange journey along with an egotistical royal pain in the derriere! Shield of the Palidine chronicles the journey of Elise to find the true Redeemer, Pierre's transformation to a warrior of immense abilities, and their unbridled love, despite all the tensions of class, bigotry and intolerance. Barbara T. Cerny is an information technology specialist and supervisor at Wright-Patterson Air Force Base in Dayton, Ohio, and a retired Army officer. She is married and has two children and has authored Of Angels and Orphans, Tressa, and Grays Hill. Publisher's website: http://sbpra.com/BarbaraTCerny

The Travels of True Godliness = 敬虔腳蹤行

The Cricket on the Hearth = 爐邊的蟋蟀

The Education of Henry Adams

The Confessions of Arsène Lupin = 亞森羅蘋冒險系列之羅蘋的告白

Heart of the West = 西部之心

A Vindication of the Rights of Woman